We've all been there I think. Whether as a child or cheering your own little darlings on. Sports Day.
This is the challenge over at Tellen's Place this week. Anything sporty to be depicted on your projects.
I must admit, I was stumped for a while. Then fellow Diva, Susan threw some ideas which got my head thinking sideways again. :D 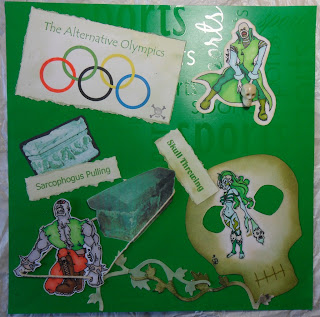 Some different sports from the norm I admit. But then the dark images that I favour from Tellen's Designs wouldn't be up for the sports of today's modern world. Would they? 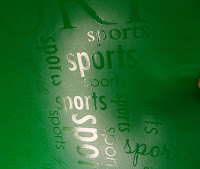 I used a 12x12 sheet that Terry sent last year in a RAK. Green with "sports" embossed all over.
Then set about colouring in some images for the two sports I decided on.
A strength contest in the form of Sarcophogus pulling and a throwing contest - skulls.

The images used were Knurgorr for strength, Sheskuller for the ladies throwing and an image that has yet to find it's way into the store for the male entrant.
All images were coloured with PMs. The sarcophogi were lifted from google images. Added bits - string for the tug rope and a little skull from stash.
The titles are computer generated. Those sharp eyed of you to notice the olympic rings are shown upside down - this was meant as it is the Alternative Olympics here after all.

Now go look at the other projects made by my fellow Divas for more inspiration and then let's see what you can make. Terry has even provided a freebie again to get you started. Winner gets to choose 3 images from the store. Exciting or what!!

A challenge or 2 that I am entering this into
Delightful Challenges - Show Green
Posted by Croms' Cubby Hole at 08:55