I am currently working on some "C" word stuff - presents for my family so most of my crafting time has been taken up by these but I did take time out to join in a swap. A Hallowe'en Tag Swap organised by "Artful Days" DT member, Jane Austin over in Facebook group.

My swap partner has now received her tag from me so I fell I can share on my blog now. 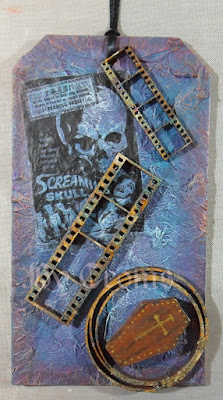 Starting with a plain grey board tag, I glued on some of the purple tissue paper that some of my Artful Days goodies arrived in. Never throw much away here lol
Dry brushed with acrylic paint when dry in shades of turquoise, titan buff and orange.
One of Andy Skinner's transfers from the "Curiosities" set applied (Creative Expressions). These are great when there is too much texture to stamp onto. 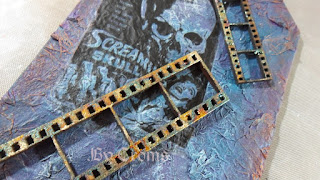 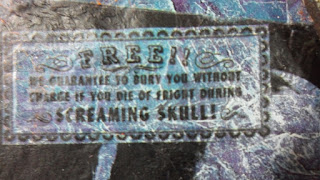 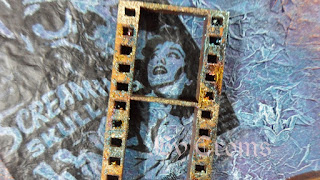 The MDF film strips and circle were given a touch of gilding flakes for added interest and colour. 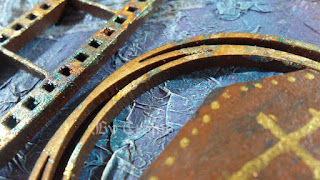 The little coffin was handmade from greyboard waste from the back of a paper stack. Several layers cut to shape and glued together. Then painted with black and raw umber was wiped back before completely dry. The gold decoration is just a marker pen. 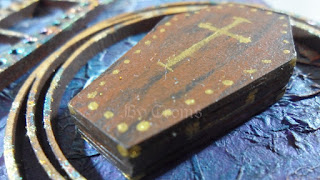 I have been busy with a "monster project" that will be revealed at the end of October when Hallowe'en is on most people's minds. Part of a blog hop that has been organised by Cathy Frailey over on Facebook.  I'm happy to say my project is now finished. I just have to take pics.

In the meantime, I thought I'd join in a couple of challenges.

The first challenge is that of a new challenge blog Steampunk Challenge Blog. 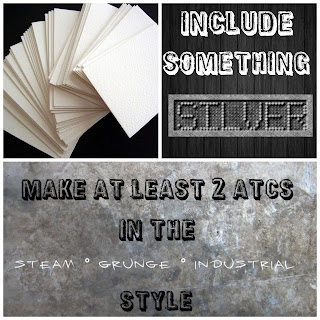 I've done the two in a Steampunk style. 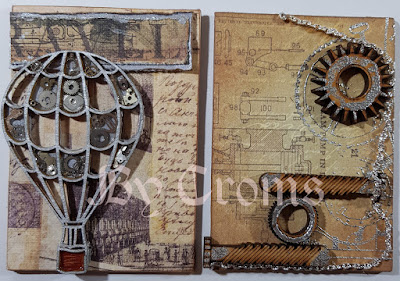 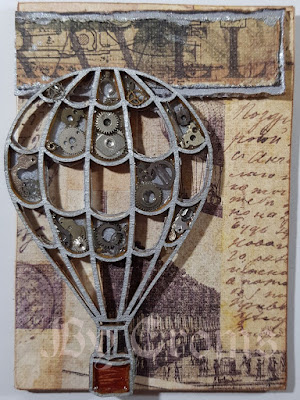 From the "Time Traveller" pad. I used the waste from the top of the paper for the "travel" , mounted on a scrap of thin grey board after distressing the edges them ran a finger with silver paint round it. The Scrapinec hotair balloon was coloured silver then mounted on some scraps of silver card. using my trusty knife, some of the card was removed to reveal the paper under it. The remaining spaces were filled with liquid glass and some silver watch parts embedded in. The basket was more grey board painted brown, stuck on and the aperture filled with more liquid glass. When set, mounted on the ATC. 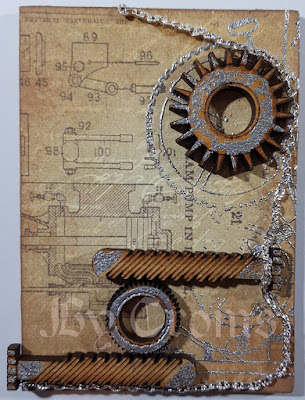 With the picture of a Steam Pump in Detail on the paper, I went for more conventional embellishments. After heat embossing, in silver, an image of a machine onto the paper base, I added some wooden cogs and threaded pistons after adding a bit heat embossed detail. Some silver chain added the final touch (applied with matt gel medium).

There we have it guys, my second post in under a month. Aren't I doing well with my efforts of bringing my blog back to life?! LOL. It's not that I haven't been making - just can't show yet as I said at the beginning of this post.

I'd like to enter my 2 ATCs into the challenge at

Steampunk Challenge - At least 2 ATCs including something silver