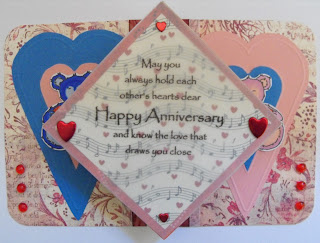 I've been playing again with different folds for cards. This one has so far been a source of amusement for my son and a couple of his mates when I used it for a birthday card and it is a nice way of displaying the three elements I wanted to include in this card. The sentiment, printed on vellum and backed with a music/hearts paper (unknown origin) secured with heart brads; and the Mr and Mrs Roger from Ellephantastic's digital range, each holding the others hearts (depicted by the colour of the patch)and pieced onto dry embossed hearts. The backing paper for Mr and Mrs Roger is Bobunny which is not to feminine as it would be for a bloke as well. The images are revealed by pulling the sides apart and would stand balanced with the sentiment diamond. The additional ribbon from stash and the little red dewdrops from Crafty Feelings. There we have it. 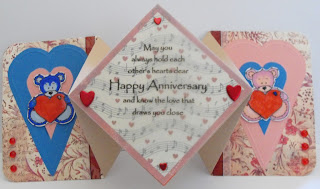 I am entering this into Ellephantastic challenge #6 for an anniversary card.
Also The City Crafter Challenge #17 for a projects with heart(s) in it.
Posted by Croms' Cubby Hole at 15:57