Wooohoooo Following the entering in of my "Nursery Rhyme" little book into Tuesday Taggers a couple of weeks ago and being chosen as the lucky recipient of those fabulous ribbons from Ribbon Oasis, I was asked if I wanted to do a little project as guest DT. What an honour.
Ildiko is the one who chose this weeks challenge. I must admit - it took me a couple of days to get my head round the colour combo she chose of 'Silver, Gold and Purple with some sort of stamping'. Silver and gold are not a combination I would normally put together on the same project, but I don't think it turned out too bad in the end. 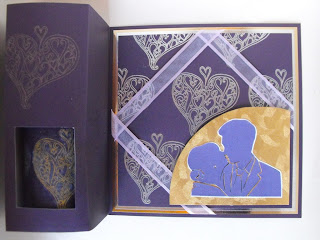 I used a digi from Delicious Doodles, changing the colour to purple using my graphics program. I actually cut out all the white bits except a small sliver round the outside of the image and mounted it on the textured gold card adding a tiny gem where the earring would be. The purple background was stamped and embossed in silver (the rubber stamp was a freebie from when I first started collecting stamps and has no name on it). This in turn was mounted onto silver and then gold miri adding ribbon at each layer before a final back of more purple to which was attached a little box for the candle. Using the same stamp and gold pigment ink stamped onto white tissue paper. The image was the right size for 3 hearts round the candle. I went over the outline with gold gel pen to make sure the image wouldn't get lost against the candle and then cut out close to the outline. With a touch of stick glue to the back of the hearts to secure and some greaseproof paper to protect, the heat gun was gently played over the area to melt the wax enough to draw the image in but not so the whiteish core of the candle is exposed.
The box has a top and bottom to keep the candle secure and a final piece of ribbon round it.

I thought this would make a nice small gift to a couple celebrating their love, anniversary or engagement maybe?
Posted by Croms' Cubby Hole at 06:18