This was going to be a cushion front, but people have a habit of leaning back on them and this grew into so much more that I decided to just use the plate I was using as a template to attach this to and hang on the wall. Why not just cut out a card base? Because I wanted more dimension. It was one of those cheap plates picked up for about 20p so not the best china. 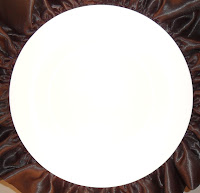 Just so you can see the proof.
The stamp plate I used was the "As Death" rubber from Smeared Ink.
So what did I make?
A "cushion" for a death mask. One of a couple of paper mache masks that were sent over from the US last Hallowe'en and still sitting in the box!
Now I'm going to bore you with some piccies. So many aspects to this that it took a few.
The front as it will be seen when it finally gets hung on the wall. 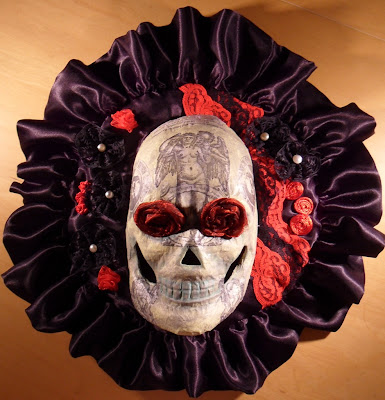 Want a closer look? Well you're going to get it. 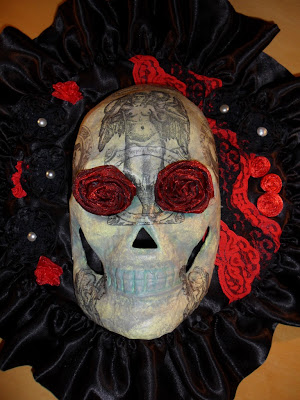 Some PinWHEEL flowers in the eye sockets instead of pennies plus 3 more down the right hand side.
Some black lace flowers with pearl button centres, some ribbon roses, some black and red lace all adorn the "cushion" base. This was made from black satin fabric with a large ruffle sewn on as well.

The skull was first primed with watered down PVA glue. Next came a coat of very pale yellow acrylic paint. When that was dry I added some black to the base coat, watered it down and "dry sponged" over to take away the "newness". Shadows formed by dry brushing the same paint into the relevant parts. Added a touch of green to the mix and went over the teeth, cheek bones and nose areas, wiping much of it away leaving just that hint of mould to the crevices.

Next comes the stamping. White tissue paper at the ready and black stazon ink and my trusty mod podge.
One central image and one of the text stamps 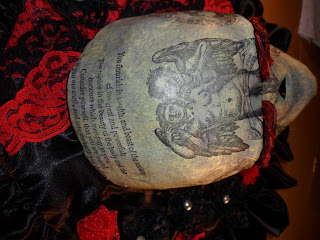 Then two each of 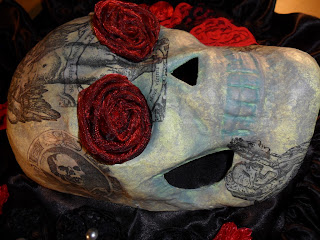 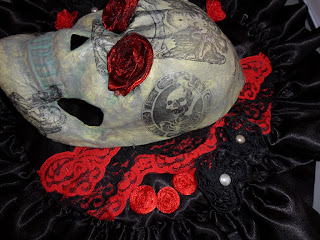 The beauty of using tissue paper is that the image can be seen through the tissue and can therefore be reversed. Which is exactly what I did.
The text from the image near the eye sockets was carefully cut out and added to the forehead and nose bridge.
That's about it.


I am entering this into the challenges over at
Haunted Design House HDH#114 - Got Goth
Smudgy Antics - Wheelie Good Time - PinWHEEL flowers used here. Never made them before but will again now.
Art Impressions Stamps - Anything Goes
Paper Shelter - Anything Goes
Forever Night Challenges - I've been Framed - all framed by that big ruffle
Posted by Croms' Cubby Hole at 20:53