Over on Ellephantastic, it's DT Angie's birthday and as it's her turn to set the challenge, guess what the theme is. Yep - birthdays. Well this is my effort. A bit later in the week than I'd hoped to post.... work has been taking up a lot of my time as well as having a couple of nights when I needed to rest. Such is life.
I have used another of Helen's Roger images. Flipped it for the second bear. So easy to do with digis. As it's a 3-D card, I chose to decoupage them both as you can't have a skinny bear can you?
Coloured with promarkers. The table and chairs are adapted from a Cuddly Buddly image and the two birds pulling the banner are a freebie from Shelly's Images over on CDAC . The papers are all digis from various sources. The flowers are from Crafty Feelings. 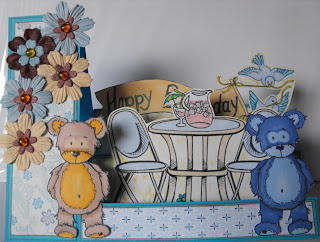 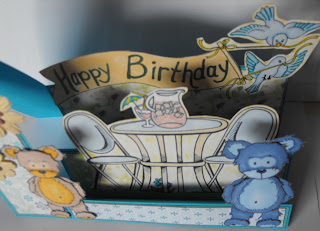