I had an urgent request to make a card for DIL's little nephew. He'll be a whole one year old on thursday. Only seems like yesterday when he was being welcomed into the world. No problem, so that was the job for this afternoon. I settled on this Dustin Pike image of a little dragon in amongst a pile of pressies. 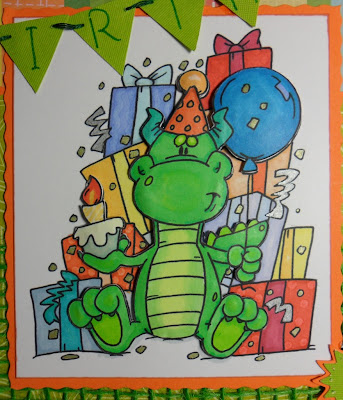 coloured with promarkers and used the blending pen to make faint patterns on the pressies. I printed the image twice so that I could cut out the dragon and layer him up. 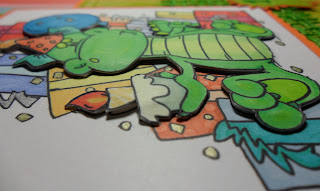 The entire card was made following the sketchy over at Seems a Little Sketchy Challenges. 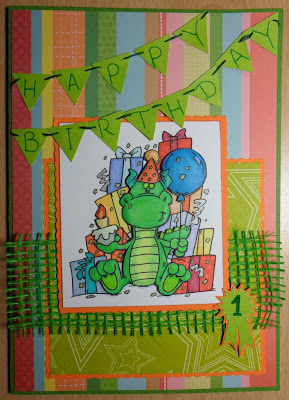 The papers and the mesh are all from a card kit from Duck Pond Crafts.
The bunting has the sentiment hand written on as is the "1" on the rosette. The colour green used as primary because that was requested.. No hard little embellies used incase the wee man gets hold of it. Can never be too carefull with little ones I think.

I am entering this into the challenge over at
Seems A Little Sketchy - Their Sketch #9
Dustin Pike Blog - It's a Dudley kind of a day
Party Time Tuesdays - Anything Goes
Paper Makeup Stamps - for a boy/man
Posted by Croms' Cubby Hole at 21:50