A new challenge has begun over at Smudgy Antics today. A really easy one as well, I think. The only difficulty is deciding which of the three elements in a line to choose. 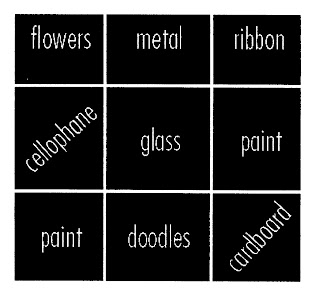 I chose two lines in the end. Ribbon, paint and cardboard running down the grid and flowers, glass and cardboard going diagonally. 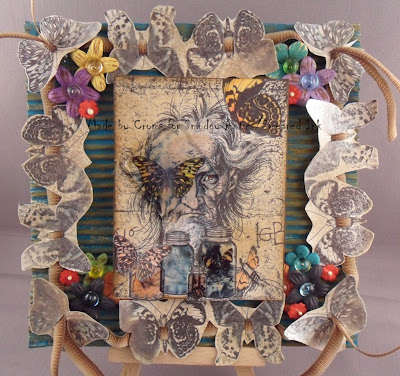 This is a 6" x 6" piece of card. The insert packaging actually from some new bed linen bought this week.

The images used are all from one of the new sets brought out by Smeared Ink in the last few days. This set is called Specimen Jar. There are more gorgeous images in the set which will get used soon but today just the male image, the set of jars. the butterfly in a jar and the three individual butterflies were used. 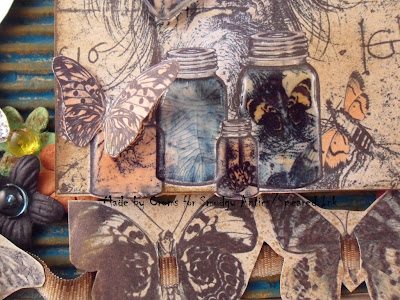 The bottles were digitally overlaid onto the male image before printing. All the images were coloured with promarkers initially. These specimen jars were then given a coat of glossy or sepia or crackle accents as seen to give a glass effect. When dry the whole thing was brushed with old paper distress ink. the butterfly in jar was cut out and layered up. The three individual butterflies each printed out four times were used as a frame. These were threaded onto ribbon after spritzing with coloured inks with added mica.
The base itself is some re-purposed packaging as previously mentioned. Did you know the the inner corrugated card can be exposed easier if you dampen down one side of the outside first? This dampened layer peels off really easily. Just a blast of the heat gun to dry any unwanted dampness away before the next stage. In my case a layer of blue/green acrylic paint. When this first layer was dry, a layer of orange was dry brushed on. Then the attaching of all the elements using silicon glue. The butterflies and flowers  attached first with some "glass" dewdrops in the flowers.
Then the main image. A TH fragment (glass) was first adhered using more glossy accents over the eye area. 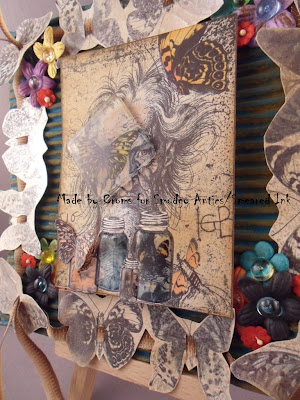 Then finally attached to the main frame with more silicon to ensure the depth. Finished.

Don't forget to go look at the projects from the other girls, the links, as always, are on the Smudgy Antics Blog as well as my side bar. Only half the team are playing this week. There'll be more from the other DT next week to inspire.

I'd like to enter this into the challenge at
Mema's Crafts - April Anything Goes
Digi Sketch - butterflies and/or Roses and/or Sketch
Posted by Croms' Cubby Hole at 19:40