Yep, it's come around yet again. The theme for this month's Design Team Throw Down is

as chosen by last month's winners Airless Chambers for Rick St Dennis. I just happen to have been wearing the hat for that team last month and thank everyone for voting our projects as favourites.

This month I am wearing the Smeared Ink/Smeared and Smudged hat. An exciting life I lead, eh?

It just so happens that Smeared Ink have a stamp set called Danse Macabre and this set had to, in my opinion, get incorporated somewhere. There is also a couple of images of dead dancers and one of these images also figured in my thoughts as I tried to decide what to make. My thoughts turned to that period in time when the great plague swept through Europe as I also had thoughts of using the Venetian Masks. Strange and scary the way my mind works sometimes. Maybe it's because I was also thinking of Poe's "The Masque of the Red Death" having just read Dan Brown's "Inferno"? Maybe I'd heard the children singing "Ring a Ring o' Roses" when playing outside? Popular belief points to this nursery rhyme being about the plague although it seems this thinking is wrong, according to various sources available on the 'net.

So what did my very tired brain cell come up with? Something that turned out to be a bit more fiddly in execution than when originally thought of. It's those little things that I think of whilst making things that seem like a good idea at the time.
This post is picture heavy - you have been warned!
First - the whole thing moves and taking pictures proved to be a task in itself. 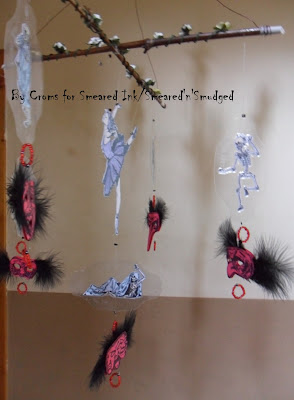 Not all the images can be seen in just one picture but you can get a good idea of what I can see.
Each of the images were printed twice. One "set" being flipped so that the image can be seen on both sides. All the images were coloured using promarkers before fussy cutting out.
The Danse Macabre skeletons were all laminated then a panel containing them cut out using a die cutter.
The Venice Masks have black feathers adorning them, sandwiched between the layers. Linking the images there are little rings of seed beads threaded onto clear jewellery thread. These represent the "ring of rosy" - the sign that the unfortunate person was infected with the disease, according to popular belief. 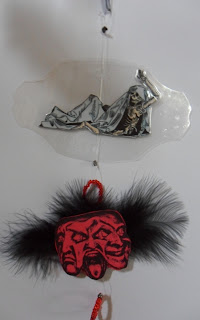 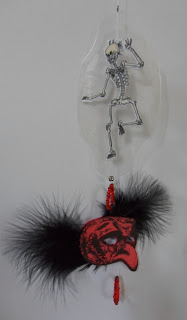 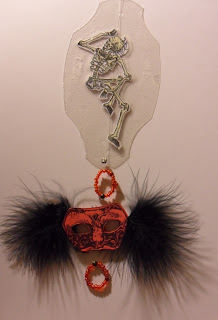 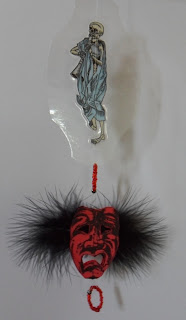 I resorted to putting some white card behind each set of images to take a photo.
The Dead Dancer features centre stage 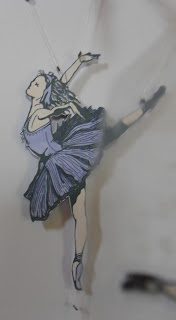 She in suspended, using more of that jewellery thread, under a simple cross form made from black cane that is growing in our garden. This was decorated with small posies of flowers as per the nursery rhyme. 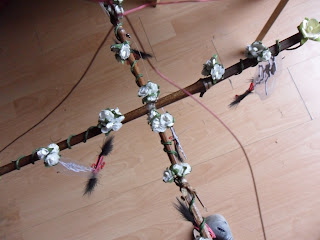 this, in turn, was suspended using red jewellery wire.
That's about it from me.

I would just like to say that it has been an honour to represent Smeared and Smudged/Smeared Ink this month and I know that my teamies will have awesome projects for you all to admire. The other teams as well will have made some amazing artwork and I'm sure the competition is going to be stiff. Again.
We now need YOUR votes in the forum to say which team has produced your favourite projects.