My weekly challenge that I am trying to keep taking part in, due to the chance of winning a MASSIVE prize at the end of the year for competing is that of Through the Purple Haze Challenges. This week is sketchy week. To make a project with the following sketch as inspiration.

I had two goes at this. The first, although I followed the sketch, wasn't exactly out of this world.
A Christmas card for my stack. 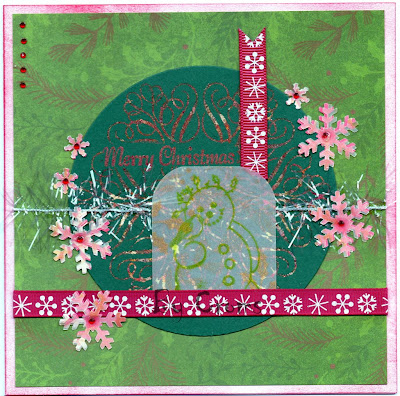 The stamps used are both Indigo Blu, the snow flake on the green circle was stamped with glue and gilding flakes applied after masking off the sentiment that is also gilded. The little snowman was stamped with green stazon onto parchment. The paper is from my miscellaneous  "Christmas papers" box.. The punched snowflakes are double layered, punched from scraps and topped with the same vellum as the snowman. Some tiny gems, fibres and ribbon from stash. All adhered to a 6" card blank that was edged with DI.

My second attempt - still following the same basic sketch but with my own interpretations added.
A Hallowe'en card therefore still seasonal. 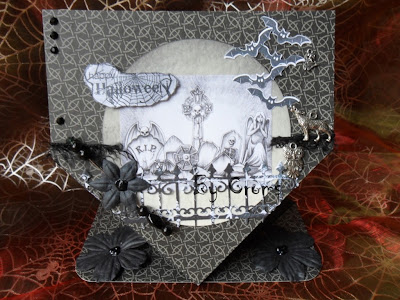 A "Spring Card" where the base and centre panels are folded to allow the card front to spring up.
The bats have taken the place of the "vertical ribbon" The die cut fence is instead of the broader horizontal band. The three "spots" on the right are charms - an owl, a howling wolf and a tiny flying witch. The four "spots" on the right of the sketch are two pins from a flower and a little gem. Ok, I added another trio of gems to balance and the base has a couple of extra flowers for decoration, but then the sketch is only a starting point after all. The paper is from a DCWV stack "La Creme" 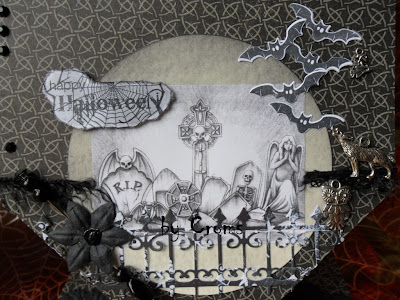 The central image is from Delicious Doodles - the Gravestone Scene. Attached to a cream coloured circle that has been ink distressed with black soot. The sentiment is from Prickly Pear as are the bats. The spider web over the sentiment is part of a Lavinia stamp.