I Haven't Been Idle

I know that not many projects have made it to my blog in the last few weeks - that's because most of them were gifts and swaps with other crafters and I didn't want to show them publicly until they had been received. Well most have now made their destinations so I feel happy about displaying on my blog.

First up is a tag I made as a swap within a group on facebook called Mixed Up Mixer. A mixed media tag with a Halloween theme.
This was the one I made 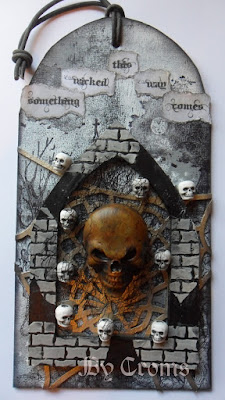 A greyboard substrate with paint and inked images layered with more (Tando Creative) greyboard cut into an arch and one of Tando's spider webs and (Tando Creative) brick stencil with (Decoart) modelling paste. Some cobweb fabric under a painted plaster cast skull. A few plastic skull beads to finish 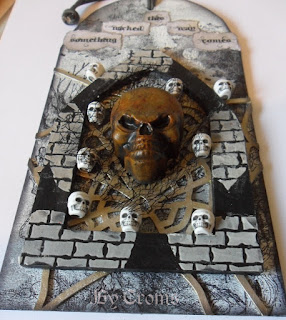 I think the dimension is better appreciated here 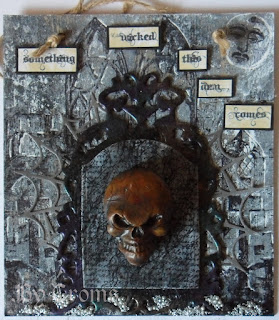 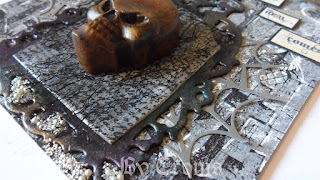 The skull was painted at the same time as the previous one, so is a similar colour. This time the greyboard substrate was brayered with paint, colours ranging from dark grey through to white. Then stamped with archival ink using stamps from Andy Skinner, high lighted with white gel pen.  The ornate die cut is one from Tonic's mixed media range cut from greyboard. Painted black then a variety of interference paint colours. Layered with another cut from the same Tonic range again brayered with paint then script stamped. The cobweb diecut to give another element in my scene.
Finished off with some white artstones and some twine to hang the picture with.