Fairies, those elusive creatures from the bottom of the garden. Humans, being what they are, have prettied them up now we have other scary things to frighten our children with. I'm not complaining though as I do like the odd pretty things, but cute? Fairies in my eyes can't be cute. I found some beautiful fairy images c/o Selina Fenach and decided to make something other than a card with two of them. So armed with my PMs, some stickles, a bottle of glossy accents, an embossing pen and a few glittery gems, I created the side panels for the chest of drawers I had in mind. I decided that the drawers should open on both the "open sides" and attached some brads to act as knobs. The drawers are the origami fold the I had done previously, thanks to the tutorial on KL stamping n scrapping. The top I decorated with some leaves, homemade and purchased flowers. I am going to enter this into a few blog challenges that are around at the moment. I took a few pics as it's difficult to see it all from one. I just wish it were as easy to take the pics in the right light. 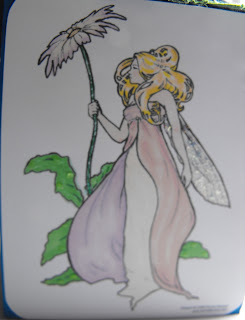 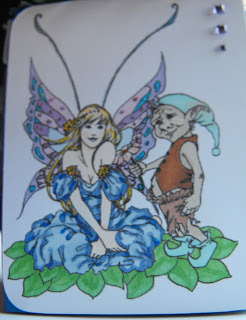 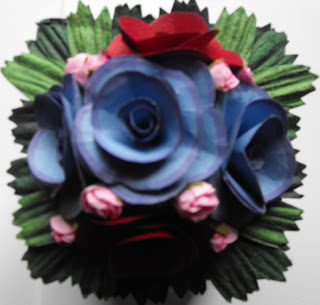 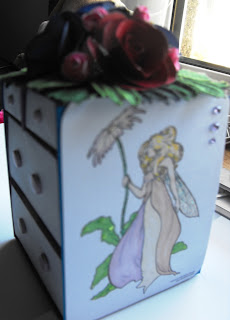 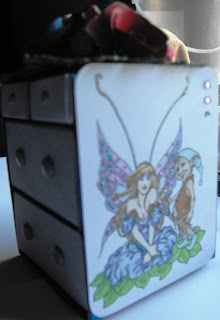 Challenges I'm entering are
Whoopsi Daisy Challenge - as you like it
Crafts and ME - anything but a card
Little Red Wagon - Brads
Creative Inspirations - Fairies
Crafty Ann's Challenges - Anything goes
Posted by Croms' Cubby Hole at 12:41